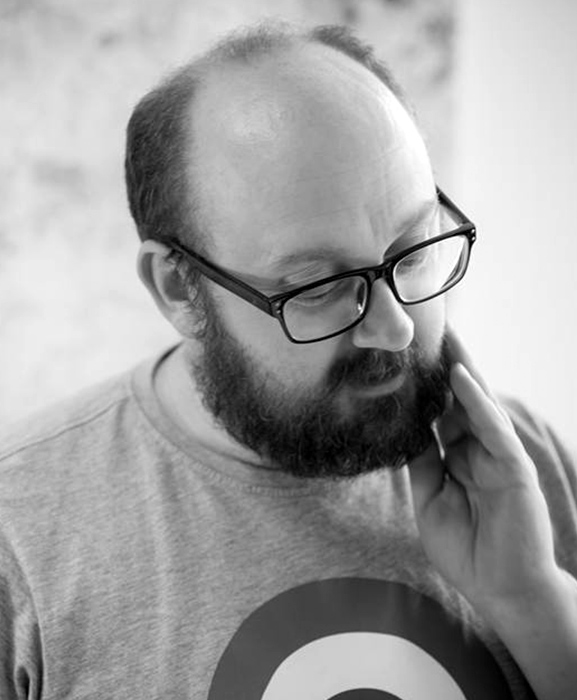 Dan is an award-winning social artist, writer, and speaker living in Margate.
His work is about people and places, and the stories that connect them. He is interested in the creation of social capital, in activating abandoned or underused spaces, and in DIY approaches to art, culture and social action. Dan often starts work with a crowdsourced exploration of a place, or with archives or collections relating to a place or topic. His work often touches on themes of migration in the UK.

Current & recent work
With five artists, he is exploring connections between the Lochnagar Crater on the Somme battlefields and TS Eliot’s time in Margate writing The Waste Land.

In an ongoing collaborating with Dawn Cole, he’s exploring the archives of two Margate printing companies. And he is ghost writing a series of short history books about Dreamland, Margate with a woman who’s lived in the town since 1700.

Dan has recently programmed The Troublemakers’ Festival for From The Station To The Sea in Swansea. He has also working with the Southampton Cultural Development Trust to map creative use of space across the city. He has also just written a number of documents making up a successful £1 million bid for Heritage Lottery Fund money to reopen Margate Caves.
In 2016, Dan made new work for the first Estuary Festival (exhibited at Gravesend, Tilbury and Margate) and in 2015 published a complete history of Stoke, from the Ice Age to thirty years in the future, told through stories he collected on one road.

Past Work
Dan was the founder and director of Revolutionary Arts (2000-2015) and author of Pop Up Business For Dummies (2012). In 2012, he was included in the Time Out and Hospital Club’s Culture 100, a list of the most inspiring and influential people in the UK’s creative industries.
Dan has used empty shops for 13 years, and he is now a recognised expert on the reuse of empty shops, and on how to create a pop up shop, and runs the Empty Shops Network.

He also started #riotcleanup, after the August 2011 riots in London. That project inspired the Nesta-funded #wewillgather, which uses social media for social good. For this work, he has been singled out by David Cameron as an example of great British leadership.

Dan has provided advice and support to projects across the UK, and spoken at workshops, festivals and seminars across the country, and in Holland, Italy and Australia. He has worked for Unilever, RIBA, Renew Australia, the Transported Creative People & Places programme, Place NI, vInspired, University of the Arts, Spacemakers and Yell.

He is the author of Pop Up Business For Dummies, published Oct 2012, and has previously written the Empty Shops Toolkit for the government’s Living Places programme. In 2012, he authored and published Pop Up People, the first study of pop up urbanism, which has been read by government ministers. Mary Portas referenced his work in her High Street Review.

Dan has written for The Independent, the Daily Express and The Guardian. Other media includes The Sunday Times, Evening Standard and The Stylist, and he has also been featured in news reports on BBC News, Radio 4, Sky News, ABC and CNN.

As well as his Culture 100 award, Dan made The Independent Happy List 2012, the BBC Radio 4 iPM Alternative New Year Honours 2011, received a Team London Award from the Mayor of London, was named in GQ’s 100 Most Influential list and was winner of the Coast Awards 2011 ‘Unsung Hero’ trophy.