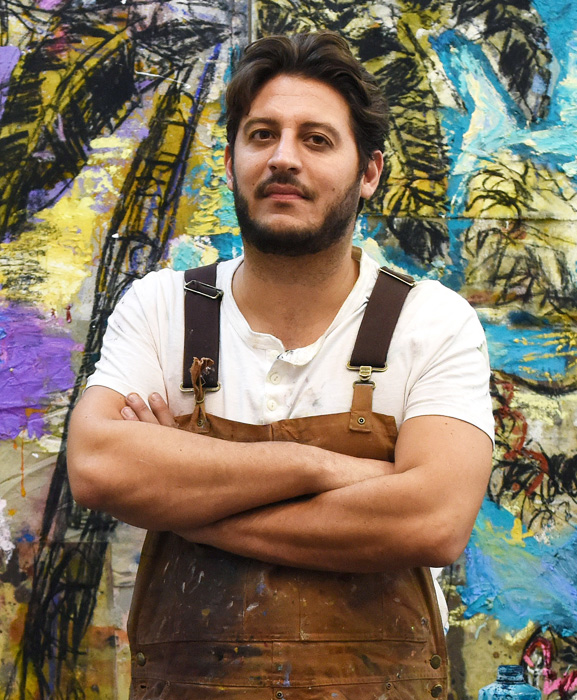 Daniel Crews-Chubb’s paintings combine powerful visual archetypes, familiar throughout human history; Gods, mythical characters, nudes, beasts, trees and chariots. The characters are rendered in his large-scale, mixed media works that typically incorporate drawing, collage and painting.
They embody a search for the authentic, the raw and the unrefined, and are subtly influenced by consumer culture, Modernist painting and the history of mark-making, from cave painting to expressionism and neo-expressionism.
His repetition of figurative motives becomes a vehicle for exploring the act of painting itself, utilizing a repertoire of seemingly casual marks that are, in fact, worked and reworked to create hard won, layered paintings. He uses oils, acrylics, spray paint, sand, charcoal and pastel with abandon on rough, stretched and re-stretched canvases that he often scrapes back and over-paints many times. Corrections are brutal, collaging further canvas and assorted material on top of past imagery to edit and proceed quickly, retaining spontaneity in the development of his ideas. His characters are introduced and reintroduced into the paintings, one feeding the next. Ancient gods and goddesses, mix with Yetis, and Belfie girls from Instagram -abstracted yet realist, false yet real.

Crews-Chubb’s employed methodology involves using his canvas structure like an ever-evolving collage both conceptually and physically, the architecture of which if dissected, would reveal numerous iterations, thoughts and actions that led to the final state of rest. If the artist dislikes or wants to change something it is covered with linen, clothing or whatever material is to hand, allowing him to adjust and proceed quickly. Thus, he is capable of making paintings that feel at once the product of their own layering and time worn history whilst remaining truly dynamic and gestural. So, whilst these works are ‘new’, they are also laced with both the history of their making and a patinated record of progress and recession. In this way, Crews-Chubb gives us something we crave – the new fresh and organic with a sense of time, history, patina and physical progress. This is combined with his ability to trigger displaced memory through reference to historical figurative parallels and abstracted homage to his inspiration both in terms of art and artefact.

Daniel Crews-Chubb was born in 1984 in Northampton and lives and works in London. He completed the Painters Studio Programme at Turps Art School in 2013, having previously received his BA from Chelsea College of Arts in 2009. His work is in public and private international institutions and collections including Denver Art Museum, The Bunker Art Space in West Palm Beach, The Saatchi Gallery and the Hall Foundation in New York. He has had notable exhibitions with Vigo Gallery, Saatchi Gallery, Roberts Projects and Galerist and residencies in Bali, LA, Denver and Istanbul.