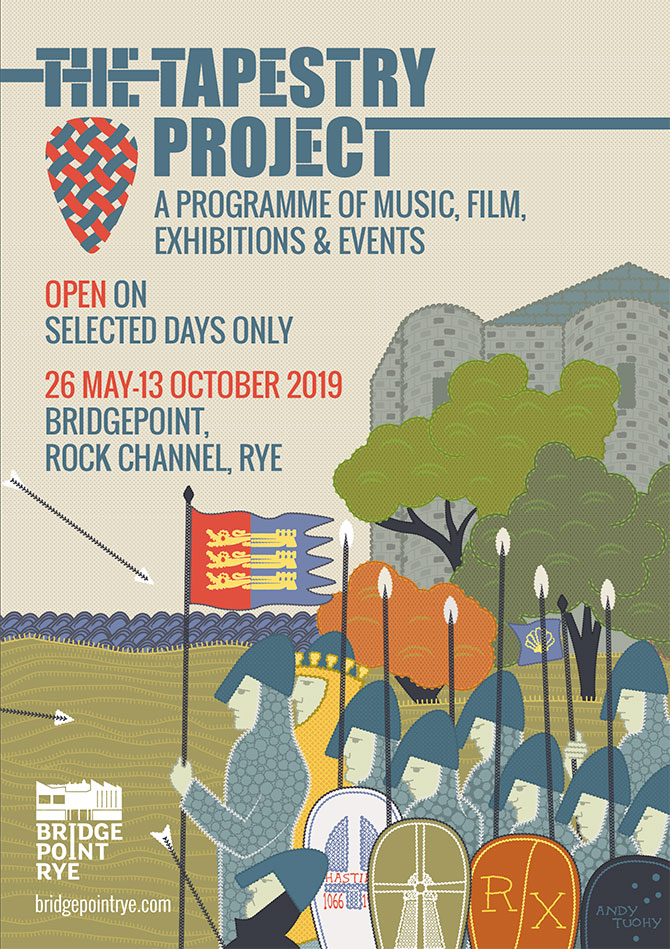 Bridge Point, Rye the new multi-genre creative arts centre currently under construction in the historic East Sussex town, marks the beginning of its development with a unique, immersive exhibition showcasing the ‘Hastings Tapestry’, commissioned for the 900th anniversary of the Battle of Hastings.

This remarkable 275 ft long embroidery consists of 27 panels created by The Royal School of Needlework, showing 81 significant events in British History from 1066 until 1966. This feat of artistic excellence has languished in storage for decades and in previous years was exhibited at the original Hastings Pier.

This immersive exhibition press event takes place at Bridge Point, Rye on Thursday 23rd May from 6.30pm to 8.30pm and will herald the emergence of this new centre of artistic excellence as an important location on the national arts map. Bridge Point, Rye will run multi-genre artist residences to nurture and develop creative ideas from inception to launch.

The Hastings Tapestry will be accompanied by a unique, newly-commissioned pop-up installation by the artist and director Tim Hopkins, whose body of work has included creative endeavours with The Royal Opera House, ENO, Opera North, WNO, BBC Symphony Orchestra, The BBC Proms, Munich Festspiele, Aldeburgh, Teatro Dell’Opera Basel, Wexford Festival Channel 4, Aurora Orchestra and London Sinfonietta to name but a few. Tim has also worked with many composers including Harrison Birtwistle, Luciano Berio and Judith Weir.

“The Tapestry Project is a chance to see again a particular example of how Britain narrates itself, from 53 years ago, in the form of the Hastings Embroidery. Its images alight on older histories, drawn from other historic visualisations of events – some recent, others remote even at the time of their own creation – a layering of inherited associations, many derived from other artefacts and artworks, presented as episodes in a continuous record.”

“It is also a chance to try to make a response, at a moment which feels charged with significance for our continuing story, when even the recent past is contested territory, and untold stories can be suddenly heard.  Our project tries to imagine something of this dynamic texture, presenting the 1966 panels and a meditation on how we narrate a nation, in the form of a new audio-visual installation.”

This new immersive work premiering at Bridge Point, Rye will also feature a live performance of an inaugural work by composer Robert Thomas performed by the London Contemporary Orchestra Soloists. Thomas is well-known for his work exploring the possibility of music adapting and changing in real-time to the listeners situation. Robert’s recent commissions include The Barbican, Los Angeles Philharmonic, Google Boiler Room, BBC, Sky TV and National Geographic and Robert has also collaborated with some of the world’s most recognised music artists including Massive Attack, Imogen Heap and Carl Craig.

Says Robert about the project:

The pop up press launch on 23rd May is the start of the journey for this exciting new creative hub and is privately funded by founders David and Sarah Kowitz. Sarah Kowitz who is also Executive Producer at Bridge Point:

“aims to support a residency programme of innovative world-class artists across numerous disciplines and hopes that if planning permission is granted for the development, it will create a flourishing community of exceptional talent and encourage a migration of arts, which will continue the drive towards coastal regeneration.”

Wingspan is an evening of work put together by Lynne Page, who…